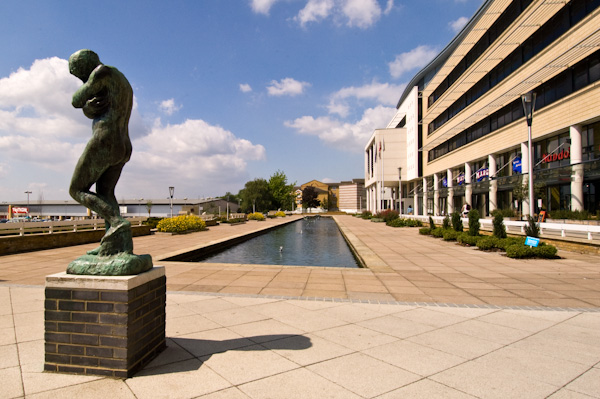 Harlow lies south of the River Stort and east of the M11 in the far west of Essex, approximately 26 miles north of central London.

Although mentioned in the Domesday Book (now known as Old Harlow) Harlow itself is relatively a new town built after the Second World War to assist with the overcrowding of London and the surrounding areas due to the mass devastation caused by the bombing during the Blitz. Today, Harlow is home to around 85,000 people with employment being supplied by vast industrial and retail areas as well as two railway stations supplying a mainline connection to London Liverpool Street.

Harlow is the home to a major collection of public sculptures (over 100 in total) by artists such as Auguste Rodin, Henry Moore, Barbara Hepworth, and Ralph Brown. Many of these are owned by the Harlow Art Trust, an organisation set up in 1953 by the lead architect of Harlow Frederick Gibberd. Gibberd had idealist notions of the New Town as a place where people who might not normally have access to art could enjoy great sculptures by great artists on every street corner. Consequently, almost all of Harlow's sculpture collection is in the open air, in shopping centres, housing estates and parks around the town. Harlow is also home to the Gibberd Garden, the former home of Frederick and Elizabeth Gibberd, which is a managed twentieth-century garden, and home to some of the Gibberd's private sculpture collection.